112: Music was My First Love with Darryl Hurs 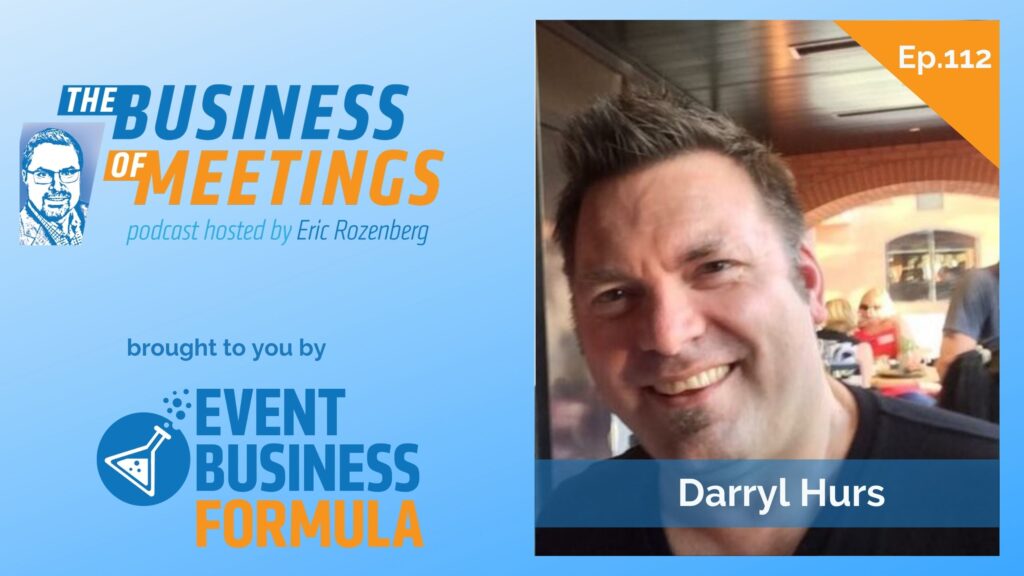 Music was My First Love with Darryl Hurs Episode 112

We are delighted to be speaking with a legend in the music industry today! Darryl Hurs is the Founder of Indie Week in Toronto. He is also the Managing Director of Downtown Global.

Darryl has created online conferences and worked with famous bands and musicians like U2, Madonna, Beyonce, Jay-Z, and Dave Matthews.

Darryl is a fascinating individual! In this episode, he tells his story, talks about music, marketing, and engagement, and paints a vivid picture of the future of conferences.

We hope you enjoy listening to today’s captivating conversation with Darryl Hurs!

Darryl Hurs has a 25+ year history in the music business, including launching and running one of Canada’s largest music showcase festivals and the conference, Indie Week. In the past two years, he founded three new online conferences: Music Pro Summit, indie101, and SCREENxSCREEN. Recently hired as the Managing Director for Downtown Music in Canada heading the Canadian operations for Fuga, Songtrust, Adrev, Found.ee, CD Baby, and Downtown Music Services. His past positions include design and branding/marketing for Live Nation as a freelancer (projects included a corporate rebrand and logo design, launching VIPNATION.com, work for U2, Nickelback, Madonna, Beyonce, Jay-Z, and Dave Matthews) retail buyer at HMV, and booker for one of Toronto’s top live music venues (The Rivoli).

Growing up in Canada

Darryl grew up in Edmonton. He already knew in grade six that he wanted to get into the music business. The music industry in Canada was in Toronto, so he moved there when he was older, looking to do what he does now.

Darryl wanted to be a musician, so he studied guitar at MacEwan University in Edmonton. Then he joined a band and moved with it from Edmonton to Toronto. When the band moved back to Edmonton, Darryl remained in Toronto. He knew nobody there, so he started networking, volunteering, hustling, playing, and auditioning. He began carving out his career when he became a booker for a venue, started managing bands, and did all the promotions and bookings for the bands he was in. Then he took a desktop publishing course and started earning a living doing graphics and design.

He landed Live Nation as a client for eight or nine years, during which time he also launched VIPNATION.Com for them, rebranded the company, and did event marketing and advertising for several famous artists. He gained experience in marketing and promoting events and engaging fans.

Darryl has been the country rep for CD Baby in Canada for three years. At the end of last year, he received a promotion and is now the Managing Director for Canada for Downtown Global.

When Covid hit, they lost everything and started doing conferencing online. Since then, they have launched another three successful other online music conferences. They now have several different projects on the go and are on par with where they were at the start of Covid.

Darryl created Indie Week because no festivals in Toronto focused on local artists. It was a music festival and also a music conference. Just before Covid, Indie Week in Toronto was doing about 240 bands from all around the world for four nights at 24 music venues in downtown Toronto. (Before that, they were doing the UK, but they stopped when Brexit happened.) In Indie Week, they got the industry out to look at the bands and vote for the band that deserved to play at Indie Week in the UK. Then, at Indie Week in the UK, they would pick a band to bring to Canada.

Since Covid, they have partnered with a Comafest in Brazil. They have taken an artist there every year and intend to take a few artists there in August 2022. Their objective is to build the international partnerships they started online, partner with other existing festivals, and take artists to those festivals.

They have had a lot of praise and positive feedback for their online conferences! They could get higher-level speakers because they did not have to fly anyone anywhere.

They took the music conference and broke it down into different demographics to go online. Now, Screen X Screen, which is about music and tech, happens in February each year. Indie 101 is about education, and it happens in May. Music Pro Summit hosts high-level industry discussions and takes place in September. Indie Week is their hub, so they try to bring everything together in one place and focus on international connections. Many people have said that it is one of the best online conferences they have ever attended.

Their platform, Whova, is open to engagement and connecting with others. All their programs are recorded and people can talk online for three months. So any attendee can still go through the speaker and attendee list and message them after the conference. People are learning how to use the platform and taking advantage of it!

Their free weekly sessions focus on being real. The sessions have helped grow their community because people love having the connection!

People add value. Darryl believes that if you offer help first things will happen, and if you do something that engages with people, it will become valuable. So focus on people first, and monetization later.

They are planning to stay online because it is working well. They are also looking for ways to utilize what they have done online and do something in person when the time is right to do so.

The goal for Indie Week is that the participants make connections that turn into a real business.

People make a mistake when they try to recreate a face-to-face event online. Indie Week is an online experience, and the organizers are making the most of it! They are not trying to do what they would normally do in person.

They gained valuable experience from doing four online events in one year. They learned to utilize the positive aspects of the online experience and capitalize on them.

Darryl believes that AI will make it possible for anything to happen musically in the future!

Everyone in the world is online today, so artists need to plug into social marketing. That means using Facebook ads and Instagram ads and knowing how to use the data to locate their audience and the areas where people are tuning in the most. Then they need to start feeding different ads to that market to build a story. They can also use billboard ads, magazines, and online advertising programs like Found.ee.

How can artists get known?

People need to talk less about business and more about who they are and how they are doing. Digital is global, so there is value in considering how to elevate an in-person event to online. Being inclusive is also vital.