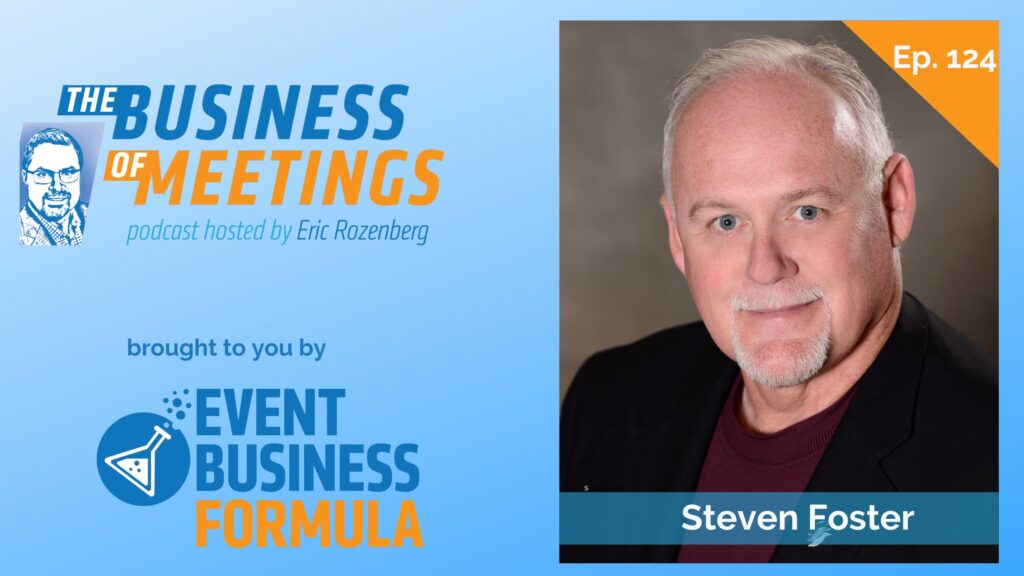 The Business of Meetings – Episode 124: Full-Throttle with Steven Foster

We are delighted to be speaking with a legend in our industry today! Steven Foster is the Managing Partner of Foster+Fathom, a Leadership Training and Goodness Alliance in Dallas, Texas.

Steven is the author of Full-Throttle Leadership: Passion, Power & Purpose on the Edge of America. He joins us today to tell the incredible story behind his solo motorcycle ride around the perimeter of the US and share some stories about leadership. He also gets into what he has written in his book about passion, power, and purpose and talks about workshops, advisory, and veterans.

We hope you enjoy listening to our super-inspiring conversation with Steven Foster today!

Steven G. Foster, CMP, is Managing Partner of Foster+Fathom, a Leadership Training and Goodness Alliance in Dallas, TX. that provides opportunities for organizations and individuals to connect and create meaningful engagement, influence, and impact in the communities where they live, work, and meet.

An award-winning speaker, author, business consultant, and team-builder, Steven is a 32-year member of Meeting Professionals International (MPI), where he has served in a variety of leadership roles at both the chapter and global level. In 2004 he was inducted into the MPI Community of Honorees, and in 2022 was named one of MPI’s Top 50 Most Influential Members.

Steven also is a Harley-Davidson LIFE Member who took a 13,000-mile solo motorcycle ride around the perimeter of the United States in 2013 to support the Boot Campaign, a national veteran’s organization where he serves as an Ambassador and Advisory Board Member. That journey is chronicled in his new book, “Full-Throttle Leadership: Passion, Power & Purpose on the Edge of America.” He also has a “Full-Throttle” resume receiving more than 15 top industry awards. In 2000, Steven and Wendy Foster became the first husband/wife business team to earn the Certified Meeting Professional (CMP) designation. Both of them have been profiled by CNN/Fortune as a Small Business Success.

How Steven got into the meetings and events industry

Steven stumbled into the meetings and events industry almost before it became an industry. He was living in Hawaii and working as a journalist when Hawaii State certified tour guides for the first time and offered a series of certifications and classes to train tour guides. Steven’s editor selected five reporters to go through the training. One of them got sick, so Steven was sent in his place. To acquire the certification at the end of the training, they had to take a written test and then get onto a bus to give an eight-hour “Circle Island Tour” to 16 proctors who graded them afterward. Steven found it fascinating and started working part-time as a tour guide. He loved it and decided to make a career change several months later.

Steven met his wife, Wendy, while working at the destination management company where she worked. Wendy eventually left that company to work for a family-owned meeting and event ranch in north Texas. She and Steven then acquired that business. They got a great team together, rebuilt the business to host corporate and association meetings, and ran it for eighteen years.

A husband and wife team

Steven and Wendy each had their own strengths and talents and did their best to play to them. When people saw them working together, they saw genuine affection and respect. They focused on growing the business and building a great team and did tons of amazing events!

They learned a lot as business owners. It pushed them to live in their lane and keep growing.

Things he would change

Steven tended to move too fast at times. So he did not always share his intended route with the team or thank them enough for all they did.

Drawing from his experiences

Steven has worked for the best and the worst business leaders, and he learned from all of them! As a business owner, he constantly draws from his experiences as an employee. He also draws from his more than fifty-five years of riding motorcycles.

Steven believes that leaders are not born. They become. That means that leaders should constantly be learning and serving their teams.

Many lessons about leadership are to be learned from motorcycling. One is that leaders cannot constantly stay in the front because there is too much resistance and blowback there, and intense focus is required. So motorcyclists ride in a coordinated and staggered formation, use hand signals to communicate, rotate back into the pod, and allow their wingmen to assume the number one position.

Steven’s definition of winning in life is moving together, working together, and serving everyone who rides with you every day to do the job you do- whatever it is.

The tagline of the Boot Campaign is: “When they come back, we give back.”

A US perimeter ride

The grand-daddy of all the rides a real biker would do is the perimeter ride of the US, which takes a minimum of thirty days to complete. In 2011, Steven came up with the idea of doing a US perimeter ride as a fundraiser to raise awareness and support for the Boot Campaign. It took him and a group of bikers about a year to map out the route, and they decided to do the ride in 2013. Over time, however, everyone slowly dropped out, so Steven decided to do the ride alone. Riding alone made the trip much more memorable, and he met some amazing people along the way.

Doing the US perimeter ride was the greatest accomplishment of Steven’s life! He feels that it changed him fundamentally as a person because it allowed him to see people who were overcoming insurmountable challenges, setbacks, and losses getting up every day saying they wanted to make their piece of the world a better place.

A core part of leadership is realizing that you need to constantly be learning and building up your skills so you can weather the storms when things go wrong.

In his book, Steven talks about passion, power, and purpose as the three lessons of leadership. Passion is about finding the right ride. Power is about fueling the ride with skills and capability. Purpose is the focus of the ride.

Steven encourages everyone to do what the Boot Campaign girls did. They were not in the non-profit space, nor were they professional fundraisers. They just read a book that touched their hearts and decided to do something simple and profound to connect people. They truly understood that to understand somebody, you have to walk a while in their shoes.

Full-Throttle Leadership: Passion, Power & Purpose on the Edge of America by Steven Foster

Lone Survivor: The Eyewitness Account of Operation Redwing and the Lost Heroes of SEAL Team 10 by Marcus Luttrell and Patrick Robinson