127: Leadership Through the Arts with Johann Zietsman 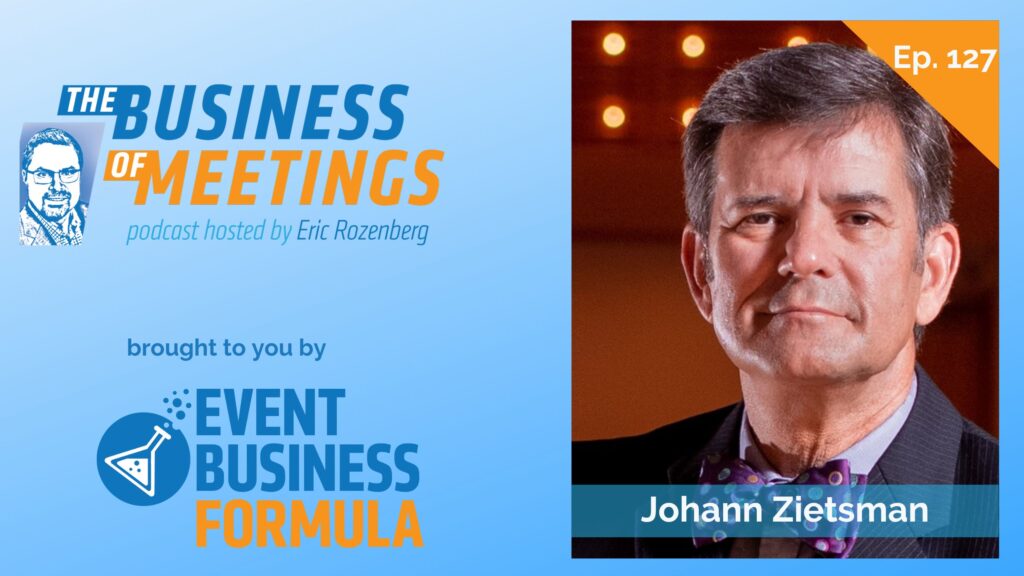 The Business of Meetings – Episode 127: Leadership Through the Arts with Johann Zietsman

We are delighted to be speaking with Johann Zietsmann today! Johann is the President and CEO of the Adrienne Arsht Center in Miami. He joins us to share his unique and fantastic journey and talk about servant leadership, the philosophy of Ubuntu, and the arts. We even sing a little bit!

We hope you enjoy listening to today’s captivating conversation with Johann Zietsmann!

Born in the 1950s in South Africa, Johann Zietsman grew up under the Apartheid regime and first got involved in the arts as a brass player in his high school band. That led to his lifelong passion for the transformative value and role of the arts in a community.

After serving in the military, he graduated as an architect, and Johann and his wife, Tharrie, moved to Ithaca, New York, where he completed a Master’s degree in music.

During this time, he was actively involved in the political transformation of his homeland through pioneering work in the arts, resulting in recognition from Mr. Nelson Mandela’s government. As a volunteer, he launched and directed two community youth initiatives, which currently serve about 4000 at-risk children (annually) in townships.

Johann and his family moved to the United States when he was recruited in 2002 by the International Society for the Performing Arts (ISPA), based in New York City. Since June 2007 he served as Executive Director of the Mesa Arts Center, and Director of Arts and Culture for the city of Mesa, Arizona. In December 2009, Johann accepted the position of President and CEO of Arts Commons in Calgary, Canada.

He took up the role of President & CEO of the Adrienne Arsht Center in Miami in December 2018.

Johann was born in South Africa during the apartheid. As with many other white South Africans, he grew up with the idea things were normal. In time, however, he realized how terrible and wrong apartheid was and tried to do something about it.

At eighteen, he got conscripted into the military to keep the “terrorists” (black people organizing resistance against apartheid) out of South Africa. He spent many years with other white South African soldiers in guerrilla warfare on the northern border between Namibia and Angola. He was also studying architecture and playing the French horn in a local symphony orchestra for pocket money at the same time.

It was a difficult journey for people like Johann, who questioned apartheid and worked against it.

After graduating as an architect, Johann married and went to Ithaca, New York, where he did a Master’s degree in music.

Johan and his wife returned to South Africa to be part of the struggle for democracy, and Johann spent the next twenty years working in arts management.

In 2002, Johann got recruited to a job in New York, so he and his family emigrated. He has lived and worked in various places in the US since then and has been in Miami for the last three-and-a-half years.

Arts are universal because all humans have similar dreams, desires, and aspirations. We all laugh when we’re happy, cry when we’re unhappy, and dance when we hear music. The universality of the arts ultimately brought Johann to the profession he decided to pursue.

A lesson learned from the arts

One night, while at a shabeen (a bar/nightclub in a South African “township”) with some friends, Johann was fortunate enough to see the famous South African actor, John Kani, and another actor performing a play called The Island. It was written by South African playwright Athol Fugard and is about two Robben Island prisoners discussing what they want to do after their release. Johann did not know who John Kani was back then, but he loved the experience!

A decision for life

Watching The Island was the first time Johann fully understood that black and white people were the same emotionally. The understanding conveyed to him via the arts prompted him to become involved with the arts for the rest of his life.

Johann met Nelson Mandela three times. He was a true leader, and Johann found him even more wonderful than everyone said he was!

Johann taught black kids over weekends while running the music school in Cape Town, even though he was not supposed to do so. He also visited Robben Island several times to do music demonstrations for the prison guards’ children when Nelson Mandela was imprisoned there.

The Adrienne Arsht Center was started 20 to 25 years ago by members of the Mami community. The famous Argentinian architect, Cesar Pelli, designed the building and shaped it to look like two big mountains. The concert hall and the ballet house are both world-class venues. There are also smaller performance venues and other venues for education. The center is now in its 16th operating season. It typically does about 430 shows each year and attracts about 400,000 people.

Miami keeps on changing. To Johann, it appears to be a city that always wants tomorrow to be better than today. He finds the energy intoxicating!

Covid hit the Adrienne Arsht Center very hard. It was one of the first types of business to close down and one of the last to re-open. When it happened, Johann said the center lost its voice.

Throughout Covid, Johann and his team wanted to improve the lives of everyone in their community in any way they could. They launched many different online programs. They also launched Arsht On the Road, a pop-up show that appeared in hotels, hospitals, and shopping centers.

Johann and his team did whatever they could to engage local artists and help them make some money because the gig scene had dried up.

Johann believes that there are more opportunities for online monetization in brand new work that has never been seen before and work that people are unlikely to see live.

Ubuntu is an ancient African philosophy very close to Johann’s heart. The philosophy embodies our interdependency as humans and is lived authentically in the African community. It means that if you are unhappy, I cannot be happy. Or if I have food, you will not go hungry. (Directly translated, it means that a person is a person through other people.) Great South African leaders like Nelson Mandela and the late Archbishop Desmond Tutu were advocates for Ubuntu.