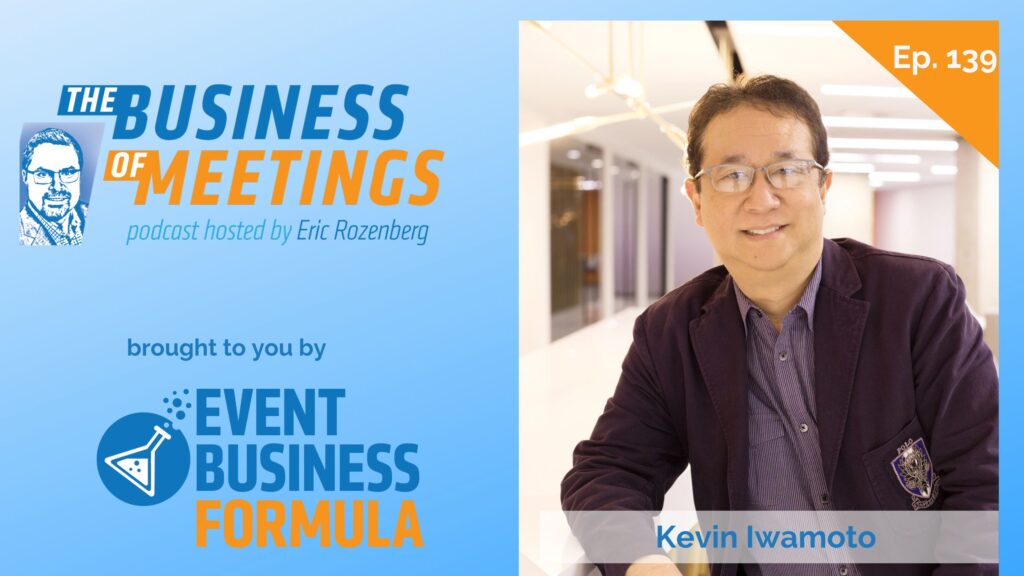 The Business of Meetings –Episode 139 – Representation Matters with Kevin Iwamoto

Today, we are delighted to speak with another icon in our industry, Kevin Iwamoto!

Kevin has received many awards! He is the Chief Customer Officer of Bizly and is also a speaker, singer, and writer. He joins us today to talk about our industry, changing careers, and racism against Asian people and people from the Pacific Islands.

We hope you enjoy listening to today’s engaging conversation with Kevin Iwamoto!

Kevin Iwamoto is an award-winning speaker, industry influencer, author, educator, and subject-matter expert consultant in business travel, GDPR, SMM, the meetings/events marketplace, and personal branding. His progressive industry expertise is featured regularly in industry trade publications, such as Business Travel News (BTN), Northstar Meetings Group, and MeetingsNet. He was President and CEO of the NBTA (now GBTA) from 2001-2003 during the tumultuous 9/11 aftermath.

Kevin is the recipient of many industry awards and recognition, including the 2015 Travel Weekly Gold Magellan Award for Best Overall Industry Blog, which is now syndicated and featured as Industry Insights via Northstar Meetings Group online. Kevin is also the 2016 MPI RISE Award for meetings industry leaders, and in 2014 he received a rare honor from GBTA with a designation as Industry Icon. Throughout his career, he has also been included in numerous industry Top Most Influential Executive lists.

He has two published books to his credit, Strategic Meetings Management: From Theory to Practice published in April 2011, and, Your Personal Brand, Your Power Tool to Build Career Integrity, published in October 2016. Both are available via Amazon. Before joining Bizly, Kevin was Sr. VP at GoldSpring Consulting and VP of Industry Strategy at Lanyon, Active Network, and StarCite. As a buyer, he was a Sr. Global Category Manager for HP’s global travel and meetings team and Sr. Travel Account Manager for Disney Worldwide Services.

Kevin received a scholarship from Hawaiian Airlines to attend the University of Hawaii’s Travel Industry Management School and graduated with a Bachelor’s degree in business. While at college, he made a living and contributed to his tuition fees by performing in nightclubs and working part-time for Hawaiian Airlines. His business degree helped him focus on the business side of his entertainment career. He did several recordings, collaborated with other local artists in Japan and California, and later created a label of his own. After retiring from live performing, he transitioned to a career in business travel, meetings, and events.

Kevin recorded three vinyl albums. Many years later, he saw that others had placed his music online without his permission. During the pandemic, he finally had the chance to regain control by successfully monetizing his music after remixing and digitizing it, re-registering and re-copyrighting it, and then making it available on the internet.

In the 1980s, after moving to California, a high-profile manager informed Kevin that he would not represent him because there was no market for Asian or Pacific Islander performers. Kevin had grown up in Hawaii, where people were mostly Asian and Pacific Islanders. So that was the first time he ever encountered racism. Even though he chose to overlook that incident, he decided to stop performing, and look for something different.

From business travel to meetings and events

Kevin moved into business travel and became a travel manager for various companies, including Walt Disney and Hewlett-Packard, where he successfully managed global travel programs for big corporations.

After that, he transitioned to meetings and events and wrote a book about initiating the Strategic Meetings Movement. He got a lot of recognition for that. Then he helped to institutionalize a corporate standard for how big corporations and enterprises should manage their meetings programs on a global level. After that, he took to the road to evangelize the corporate standard globally and won some awards along the way.

No problem is unsolvable

After pulling the travel industry out of the 9/11 global crisis, Kevin realized that no problem is unsolvable.

As the Chief Customer Officer Head of Enterprise at Bizly, Kevin leads the customer and enterprise efforts and guides sales and customer success teams.

Kevin believes that DEI awareness occurs in people at different points in their careers. Some people get it when they experience racism directed toward them. Others get it after hitting a glass ceiling when trying to advance their careers and attributing it to racism.

Kevin points out that scapegoating is easy when people look different from you. People need to realize that second or third-generation Asian Americans are American on the inside.

Kevin has realized that it is up to him to overcome his cultural programming, speak up, correct people, and take the time to educate racist individuals on why racism is not okay.

Fighting racism in the industry

Representation starts with a voice. For Asian Americans and Pacific Islanders to have a voice within the industry, associations, or corporations, there should be a sub or separate group that accepts responsibility for education and awareness.

Mentorship programs are vital for creating easier paths to the top for underrepresented individuals.