146: From Corporate to Convention Bureau with Christoph Tessmar 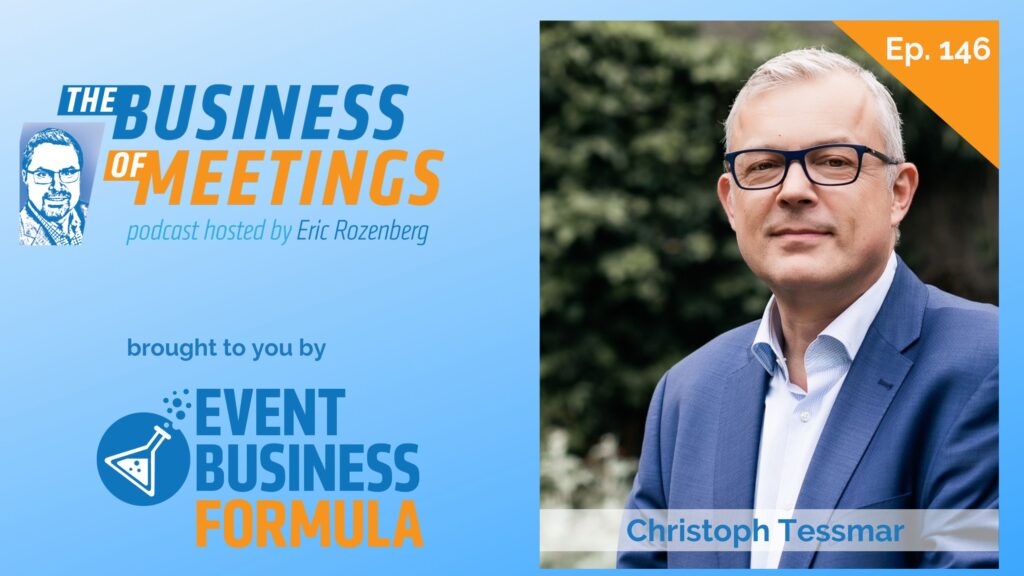 Today we have the great pleasure of speaking with Christoph Tessmar, the Director of the Barcelona Convention Bureau!

Christoph is well-known all over the world in the meetings and events industry. He has had an incredible journey, from pharmaceuticals to events to becoming the head of the Barcelona Convention Bureau. He joins us today to discuss his journey and to share many fascinating stories!

We hope you enjoy listening to today’s inspiring conversation with Christoph Tessmar!

Christoph Tessmar was born in Heidelberg (Germany) on the 3rd of May 1964. After his education, he started his professional career (always in the pharmaceutical industry) in Boehringer Mannheim as an area manager for some countries in South America. In January 1990, he moved to Boehringer Mannheim in Barcelona, where he started with the organization of some events and congresses. In 1999, he joined Sanofi-Aventis Spain, as congress manager. He was in charge of the organization and coordination of all the events of the company (national and international congresses, product presentations, symposia, sales conventions, and booth design) nearly 500 events per year, where he worked until January 2012. Since March 2012, he has been the Director of the Barcelona Convention Bureau. Since April 2019, he has been president of the ICCA Iberian Chapter and a member of the PCMA European Advisory Board.

Christoph started his career working for a pharmaceutical company in Germany while he was still studying back in 1981. In 1989, he went to Barcelona to work with an affiliate company. He liked it so much that he asked for a permanent position there. He was offered a job on the salesforce and had to go out selling to gain experience. The marketing manager contacted him saying they had a new product to launch, and asked him to help them organize an event in Berlin. The event was a success! As the company grew, he was asked to do more events. In 1998, the company was sold, and he had to leave. He then received an offer from Sanofi-Aventis in Spain to create a congress department. He remained with that company until he joined the Barcelona Convention Bureau in 2012.

As someone from the corporate world, Christoph felt challenged when he was asked to join the Barcelona Convention Bureau, but he accepted the position because it was a chance for him to do something new and different.

Christoph gained the trust of those he had to represent because he was known to be open and present as a Congress Manager in the meetings industry. The Convention Bureau is within the DMO of the Barcelona Tourism Board. He was known by many people who had confidence in his ability, and they welcomed him happily.

The Barcelona Football Club was a member of the Barcelona Convention Bureau. However, the membership is frozen while the stadium goes through a four to five-year process of reconstruction and renovation.

There have been many attacks, riots, and crises in Barcelona since 2014. The Barcelona Convention Bureau managed to get through all of the unexpected crises, including Covid.

Fortunately, Christoph has developed a good relationship with the police over the years, and they have been very helpful. When something important is about to happen in the city, the Convention Bureau forms a security committee, including the police, to plan and prepare in case something unforeseen occurs.

Since the pandemic, many cancellation policies in Barcelona have changed because clients have asked to cancel with a shorter notice period.

Christoph recently closed one of the best and most successful IBTMs he has experienced in all his years with the Convention Bureau. He was surprised by how successful it was because he had no idea what would happen or how many buyers, visitors, and exhibitors would be there. They have subsequently signed a contract to have IBTMs (Incentives, Business Travel & Meetings) in the city for three more years.

ICCA organized an event for students considering careers in the meetings industry. Three or four ICCA members will explain what they do, share insights about the industry, and answer questions, to convince the students to join the industry because the meetings and events industry needs new talent.

The benefits of volunteering

Christoph has found volunteering a way to bring his experience into various associations, open people’s minds, and help them change and adapt.