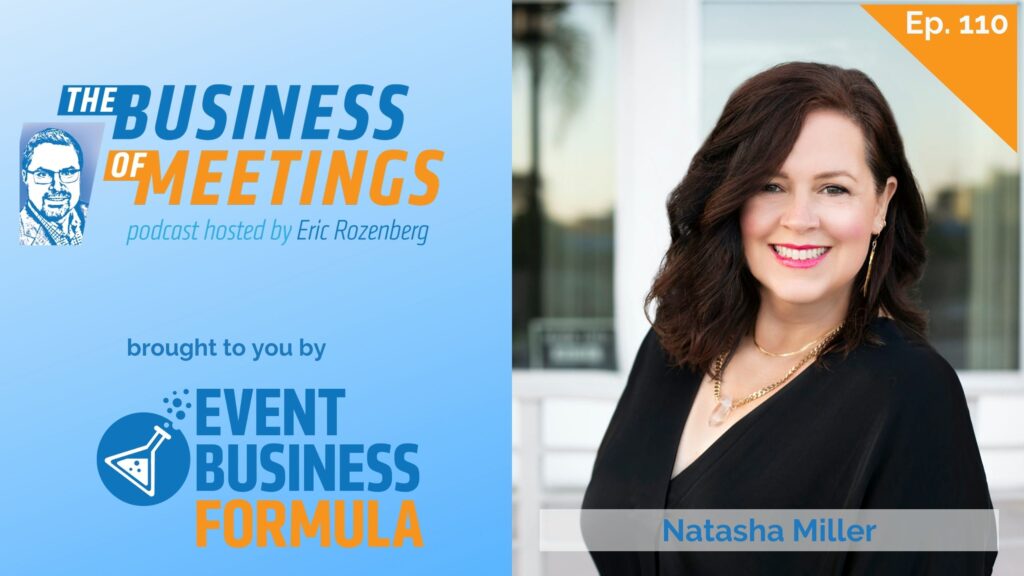 Natasha is joining us today to tell her unique story and share her experiences, ideas, and perceptions. She also offers some valuable nuggets of advice for growing your business.

We hope you enjoy listening to today’s insightful conversation with Natasha Miller!

Natasha Miller isn’t your average CEO. She sits at the helm of Entire Productions, the go-to experience design, event, and entertainment production company in San Francisco, and has been on the Inc. 5000 list of fastest-growing companies in America for three years in a row. Natasha’s passion and commitment to giving back drive her invariable contributions and participation with numerous charitable organizations. She is also performing as a jazz vocalist and a trained classical violinist. Natasha is a proud graduate of Goldman Sachs 10,000 Small Businesses. She has studied entrepreneurship at the Harvard Business School and MIT, and she is a member of The Recording Academy (Grammys), ASCAP, SF Travel, and Meeting Professionals International (MPI). She resides in San Francisco, CA, where she is a member and on the board of EO (Entrepreneurs’ Organization).

Natasha grew up in Iowa in the mid-80s. She learned to play the violin when she was young. Then she became a passionate vocalist. Music saved Natasha’s life and propelled her into her future! She earned a Fulbright Scholarship to study the violin, and she has been involved in entrepreneurial endeavors with music since the age of fifteen. Her core business is a San Francisco-based entertainment production company called Entire Productions.

Natasha has a twenty-six-year-old daughter who she adores!

From an abandoned teen to achieving her dream

When she was sixteen, Natasha landed up in a youth shelter for homeless kids on Christmas day. At the time, she was studying the violin with a college professor. Natasha always advocated for herself and made things happen. Even when she had bookings, she could not turn down performance work, so she would book other artists to take her place. That ultimately grew into her booking jazz and classical ensembles for corporate and social special events.

She found herself in the meetings and events industry many years later, after she expanded into dance bands, DJs, aerialists, and cigar bars, and she did all the planning.

In the homeless shelter, Natasha had people supporting her with her issues and helping her onto a track that would be good for her after leaving. As a musician, she had the support of her conductor, her violin instructor, and some others who recognized her gifts and talent. However, she knew that no one would come to save her, so she had to save herself.

Over the last twenty years, Natasha has realized that she needs mentors, advisors, and outside help to give her a different perspective and reveal her blind spots. Since seeking that out, her world has cracked open!

Proud of her accomplishments

Natasha attended three different colleges on Fulbright Scholarships, but she never graduated because she moved to San Francisco. She is proud of what she has accomplished without having a college degree!

After being taken to the Grammys, Natasha realized that she could become a voting member of the organization that puts on the Grammys. Even though she has not yet won a Grammy award, she hopes to enter the Audible version of her book for consideration.

Natasha wanted her book to sweep readers away and take them on a journey- almost like a fictional read. The book tells the story of her recollection of what happened in her life. It is a good read, and what Natasha lived through is very interesting!

You will enjoy the book, especially if you’re an entrepreneur or struggling to get from where you are to where you want to be!

Natasha’s organization focuses on five core values. The one they talk about the most is the pursuit of excellence, not perfection. Working in pursuit of excellence ensures that they always have enough bandwidth to cope with any challenges that might arise with the events they produce.

Another core value is that her team is self-managed. Natasha gives the team the ability to make decisions based on their own experiences and watching how she does things.

Being scrappy is another core value. Being scrappy means that they work bootstrapped on a shoestring budget, and they don’t take equity from anyone else. They don’t frivolously spend other people’s money, and they give their clients an incredible amount of value.

Recruiting people is challenging! People generally put on a facade for interviews. So it is hard to find out what their real values are. It takes intuition, a gut reaction, and experience to choose the best candidates.

Natasha does not work day-to-day in her business with clients. Right now, she is a visionary and a strategist for entire productions, so she is not solely responsible for marketing and sales. She is responsible for managing her team, but they are mature and self-managed, so it is not a heavy lift.

Natasha is technologically interested. She feels that technology shows a return on investment. Her internal team produced and designed all the technology for her latest book launch summit on the ExVo platform, apart from the switcher (the one that brings people on and off the stage). She sometimes uses third-party vendors to help with the broadcast quality of big studio events, but for the most part, everything gets done in-house.

Natasha has all the right people and processes in place, so she does not need to know about everything going on in her business.

Getting ARR (Annual Recurrent Revenue) in the meetings and events industry

Entire Productions has been around for a long time. It is known and trusted within the industry for producing excellent events, so they have several recurring clients. They also attract many new clients when their events get seen on social media. They have two divisions, so they have a lot of high volume with the artists, talent, and entertainment they put out and a smaller amount with their full-production events.

People spend about ten percent of their budget on entertainment. So when big numbers run through Natasha’s company- to pay for catering, for example, they try not to pass that through, and they also try not to be the bank. That is how they managed to run a five million ARR business.

Growing a business and working on it rather than in it

Have all your systems and processes down so that they are very efficient. Then, put them in a manual, and make a video explaining it. That will free you from having to train people as you scale and grow your company. Remember that your systems will change as you grow.

If you are one person with one employee, start thinking about how to delegate and share what you know. Remember that it is not good business practice for one individual to hold on to all the knowledge about a business.

Natasha feels lucky because she did not take her hardships and make them worse or turn to alcohol or drugs. Even when she felt sad or depressed, she always had a positive attitude, creativity, and an insatiable thirst for learning. She learned that once you reach a positive place, you need to stamp it as a milestone. Then, when the next bad thing happens, you know it will pass, and you won’t let it affect you.